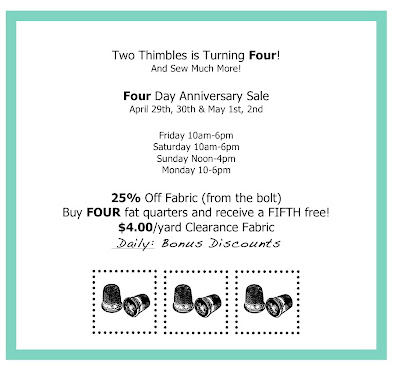 Our anniversary sale is just around the corner! Four years, can you believe it? We've got some fabulous new kits making their first appearances. Think pincushions, doll quilts, and bigger-scale projects. There's a lot to see! Just a hint...'cake' seems to be in the theme of things these days. Can't get any better than that!

Hopefully you can find some time to come in and celebrate with us this weekend!

Getting Ready for the Holidays

Hopefully everyone's out enjoying the sunshine! Now if it will just warm up a little....and maybe stop snowing, hailing, raining and whatever else might be in the works!

Remember this project? We blogged not too long ago about our new Block of the Month program, Holidays at Home. We've held our first session and we wanted to show off the progress on the store version... 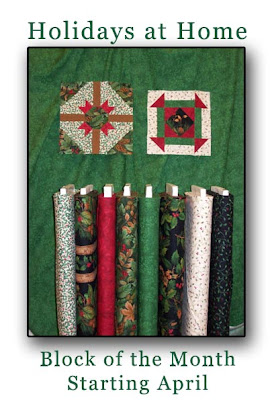 It's coming along and turning out pretty lovely, The picture doesn't even do the cheery reds and greens justice- you'll have to come see for yourself. There is still room left in this class- it meets the first Friday of each month at 1 pm. Let us know if you'd like more information or if you'd like to sign up! 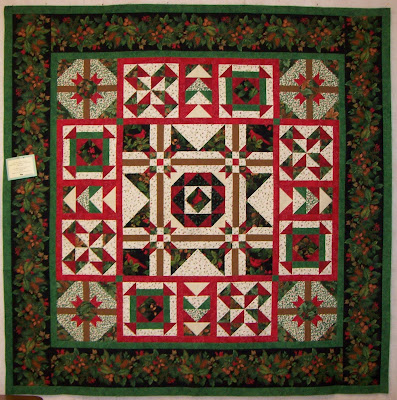 Speaking of holidays, there's an important one coming up in May - Mother's Day is Sunday, May 8. Looking for some great gift ideas? We've got these cute tablecloths and matching tea towels, perfect for spring- just a quick hem and you're all set! There are also a few new books, kits, ribbons and fun ideas that would make a great treat for yourself or a special mom in your life. 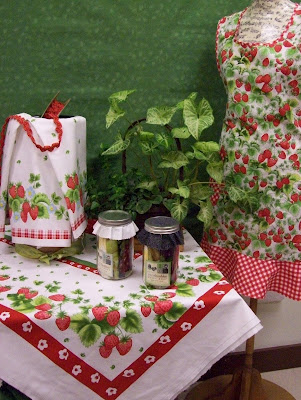 Just a heads up, we are closed Easter Sunday, April 24th. Wishing for sunshine that day!

Beginning this week...which happens to be the 150th anniversary for the beginning of the Civil War, we are adding a new dimension to our blog.
About once a month, we will feature a vintage quilt and some will be from the Civil War era. We will share what we know about its makers, history, and snippets of what we know about the quilt. Initially, we'll be profiling quilts from a private collection, but we may through in extras along the way.
This first little doll quilt is from the Churn Dash block. It's maker's name is unknown, and it's age is estimated from the late 1800's to the early 1900's. The size of the quilt is about 16 1/2" x 22", and the blocks range in size from 5 1/2" x 5", which could indicate that it was made from extra blocks or, perhaps a novice, still perfecting those quarter-inch seams? This quilt was hand pieced and hand quilted. It was purchased from an antique shop in Aurora, Oregon. 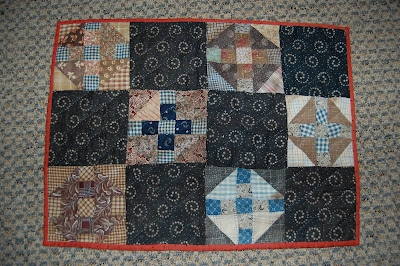 Here's a close up of the quilt. 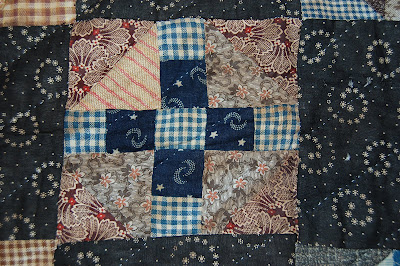 Speaking of vintage quilts, here's a not-so-vintage version of an old idea. This pattern, called Vintage T from Galloping Pony Studio, was featured in our Anniversary Celebration in May 2010. You can see it made up in two different color ways and we still have a few kits and patterns left... and we even have a couple of those darling hand-crafted doll beds available! 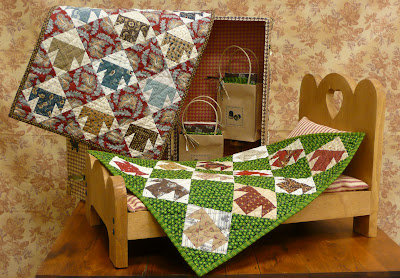 Hopefully all this rain means April showers really do bring May flowers... and in the meantime, it's a great excuse to stay inside and sew (stay positive, right?).
We've got our new pincushion all kitted up and ready to go- this one's a breeze and sooo (sew?) cute. Just a simple pillow and some decorative ribbon as an embellishment, and you're all set! 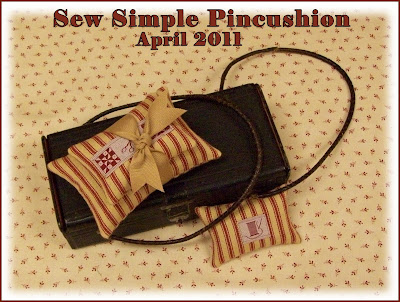 We're staying busy with all the new activities starting up in the store- from the Michael Miller Clubhouse to the Holidays at Home Block of the Month program. It's nice to see everyone getting inspired to start some spring sewing or future projects!
Happy Stitching!
Posted by Two Thimbles Quilt Shop at 11:20 AM 1 comment: