Well...we thought we'd turn up the heat...oh yeah, it's already hot outside, so now it's time to really DO something about preparing ahead for the holidays.  No pressure, but if you're like me, I always think about starting earlier, and then, sure enough the heat is on and you know what day it is.

Here is a new project featuring just 5 fabrics, you could even do with with just 4, so if you  have a favorite fabric and want to feature it this is the perfect throw size quilt.  Did I mention quick too?!  We have a kit with this wild rose fabric, and the pattern is a great one by Villa Rosa designs - a versatile pattern option to have in your bag of tricks.

And then - we do have just a few new fabrics for the holidays...love this little woody car hauling a christmas tree...


A couple of the metallic prints feature gorgeous stripes - perfect for the 60-degree table runner!  Have you thought about these for hostess gifts, your favorite hair stylist, teacher, etc...you know the perfect gift to have on hand for someone?


We thought we'd turn down the heat a bit with this wintery blue and cream collection called Snowbird by Laundry Basket - a few batiks are thrown into the mix as Edyta does best.  We have a couple of the batiks, a variety of the prints in shades of blue and a few jelly rolls and charm packs for this group, but they are going fast. 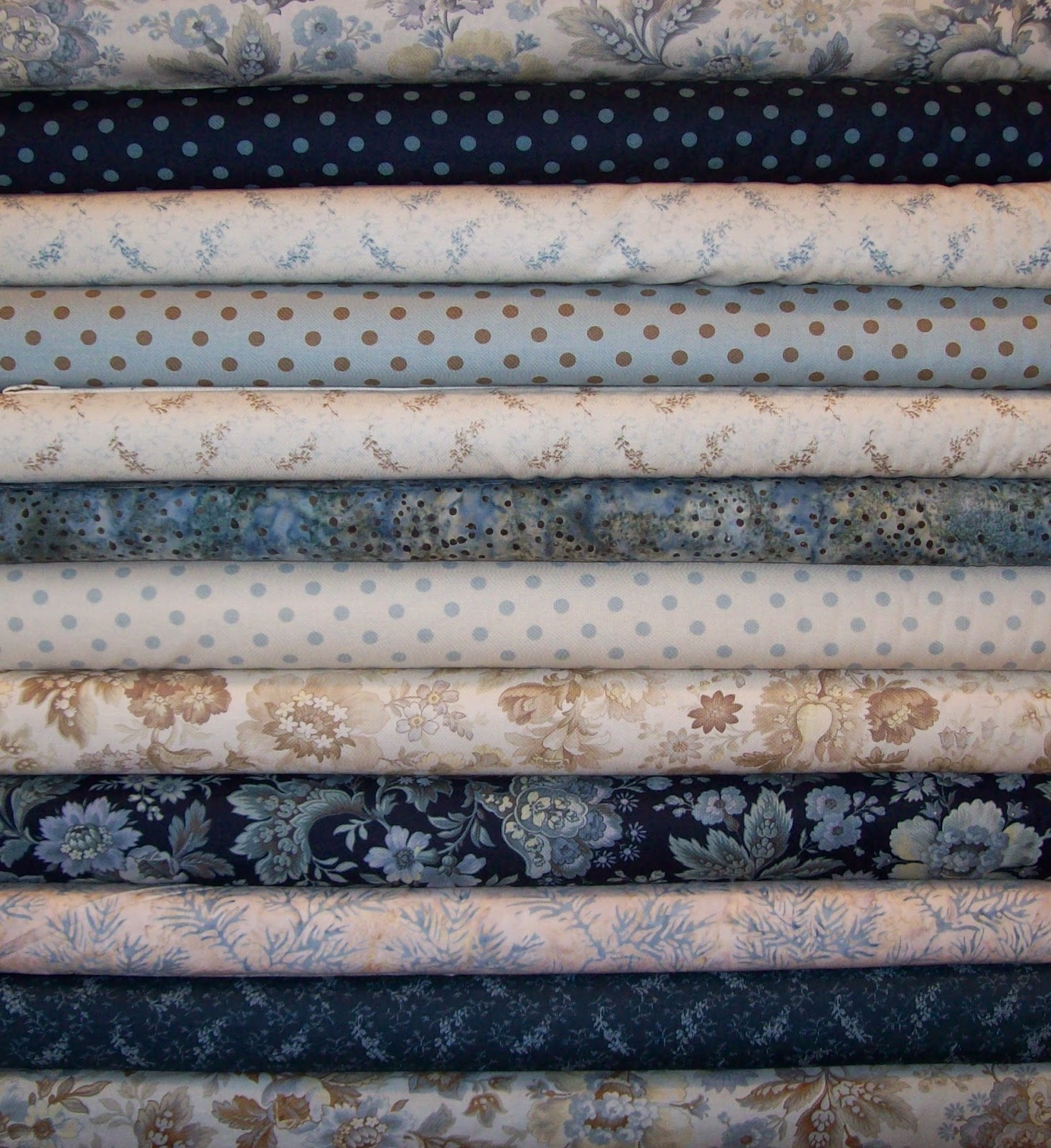 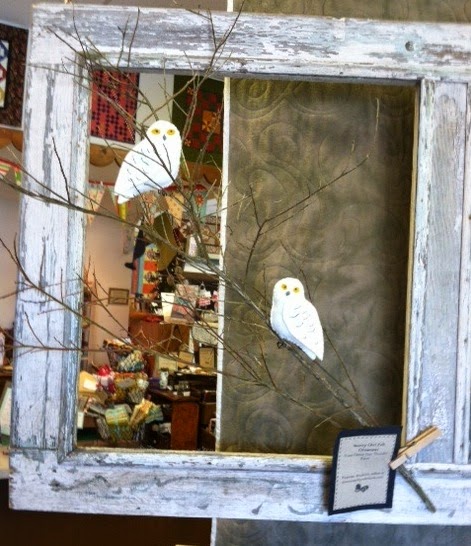 Since we were wanting to get that wintery wonderland feeling, we hung up a few snowflakes and a couple of snowy owls stitched from wool felt.  These can be a great tree ornament, decoration for a package...or just fun to display!  The website we found the pattern on is amazing - almost every bird I can think of she has created a pattern for.  You gotta check Down East Thunder Farm's website!

Posted by Two Thimbles Quilt Shop at 5:07 PM No comments:

Midsummer bloom - here is a collection of 6 fat quarters, featuring blooms of different types and colors... a perfect summer bouquet to add to your stash! 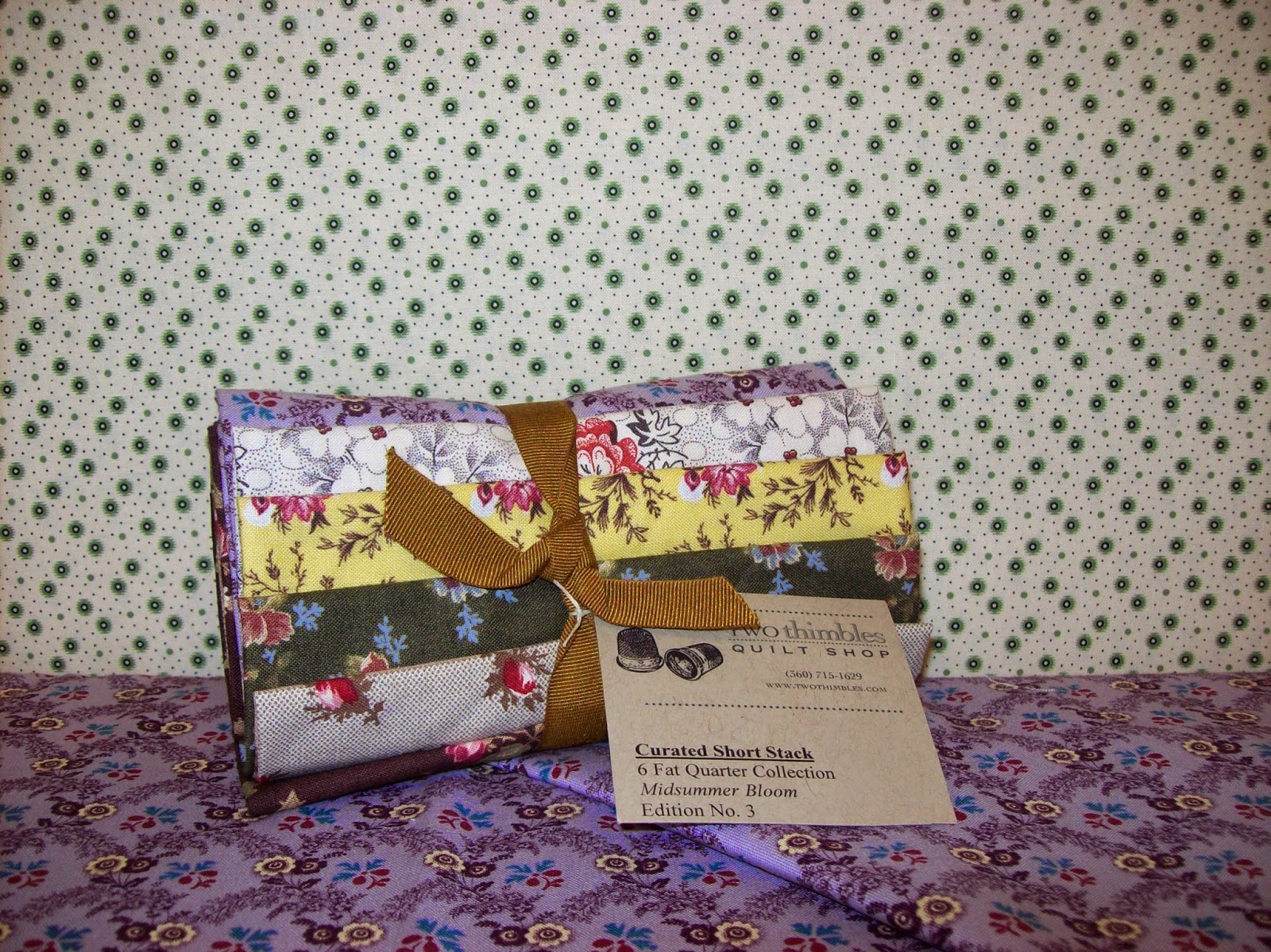 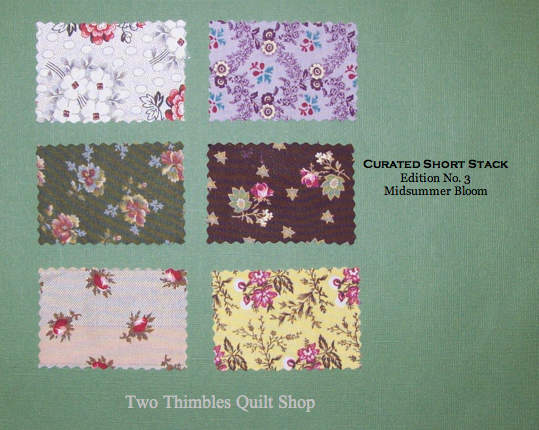 Of course, these are just a few of our favorite florals and there are lots of other gorgeous blooms to choose from.  Here is a favorite summer quilt that showcases a soft palette with birds and flowers.  This is a versatile fat quarter friendly pattern...perfect for all those fat quarters you might have grabbed recently?!

Posted by Two Thimbles Quilt Shop at 6:01 PM No comments:

Don't forget to pack an empty bag and head on over to choose your favorite fat quarters on Friday!!

We've got all of our regular inventory and we've been digging them out of every hiding spot - We plan to corral ALL our individual fat quarters in the classroom and it will be quite an impressive assortment!! 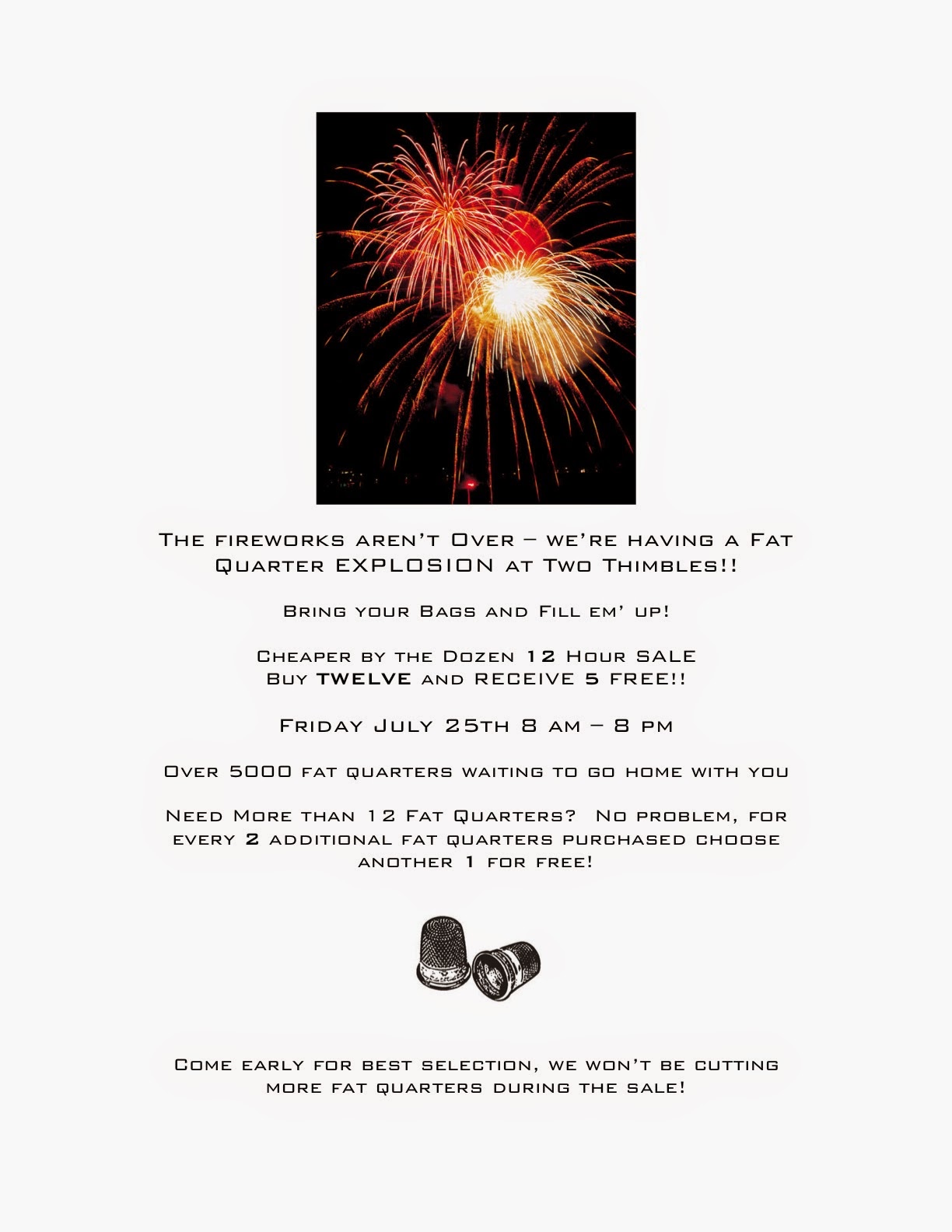 Posted by Two Thimbles Quilt Shop at 11:53 AM No comments:

These new fabrics are beautiful additions to the 1800's side of the store - the collection has a mix of pattern scale and motif size and the gorgeous feature prints are spectacular in red and blue.  The purple prints seem to be going fast though so maybe that is everyone's favorite color?

These aren't batiks - they are actually printed fabrics but they certainly could play well with a variety of styles - these are interesting printed fabrics, you can double the mileage from the prints by using the reverse side to get a slightly less intense contrast in the prints.

Can't go wrong with a punch of color added to your stash or to supplement your collection - If you need a project idea to use these new modern prints we have some of the latest magazines and a few new books in stock that feature a wide variety of quilt ideas and great sewing projects that will jump start your summer inspiration!

And of course, for those of you who plan ahead....(crazy I know....) hostess gifts, holiday gift-giving, these towelings are perfect small items to get done and have on hand.  Hmmm.

We are busy unwrapping new bolts, working on store samples, and getting some new displays set up so stop in and see what we forgot to include in the blog!

Happy Stitching in the cooler weather!!

Posted by Two Thimbles Quilt Shop at 5:51 PM No comments:

Doesn't this sound familiar...to receive a bag of odds and ends from someone who doesn't sew, but thought you would be thrilled to have yet another unfinished project?  But wow...this turned into an amazing finished project!!  Great job Linda!


From Linda:  At a family picnic in 2009, my husband's cousin gave me a bag of fabric and some finished quilt blocks that they had found when they were clearing up his Aunt's estate. His cousin had taken the blocks home and had forgotten about them until she came across them when she was cleaning out her  sewing room. I left them sitting in the bag for a long time until I closely examined the contents. I found 25 hand embroidered blocks that depicted the history of the United States up to the Indian Wars. The blocks included 12 American eagle blocks as well. 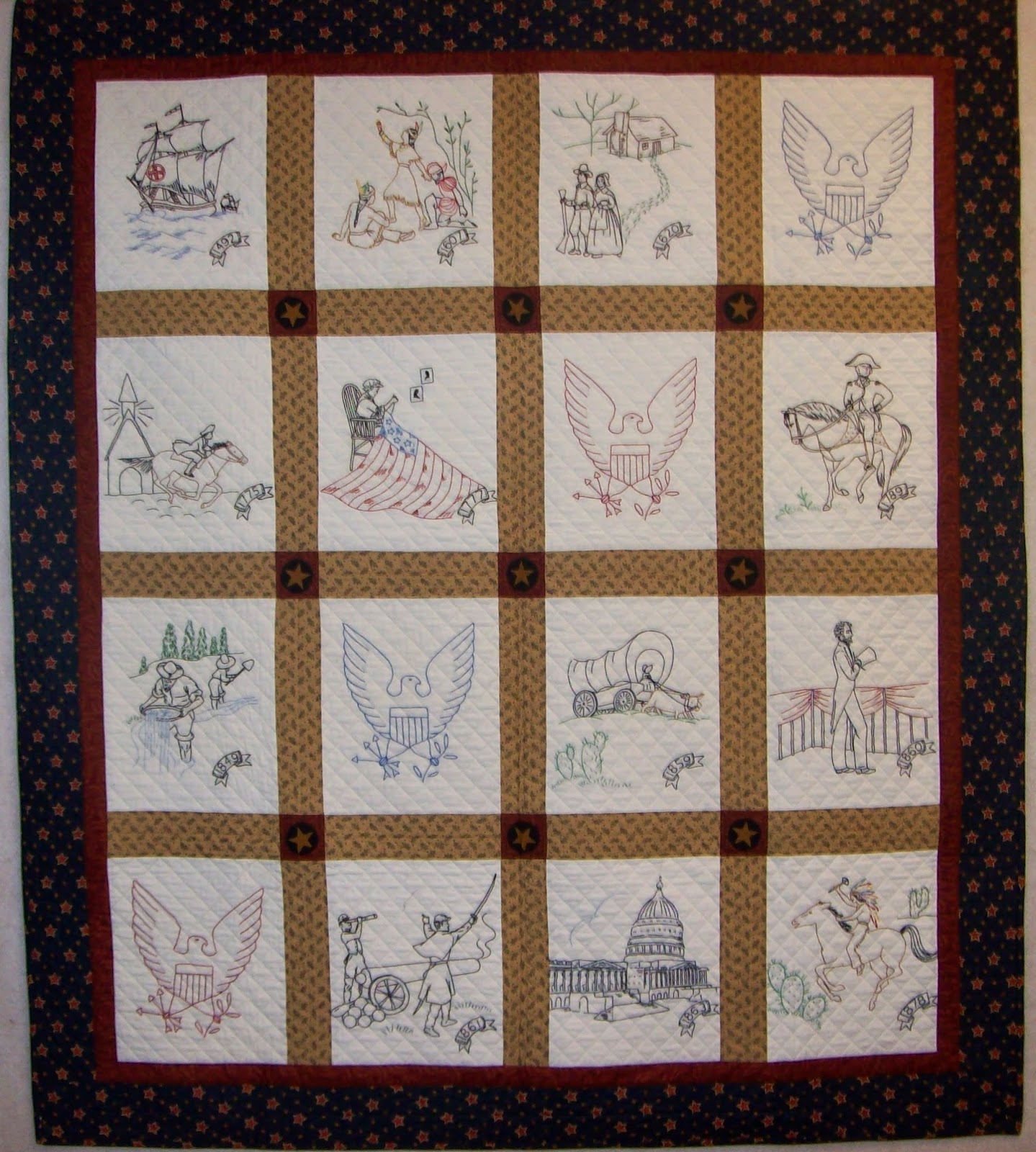 The blocks were stained and not square and I looked at them for several years with some trepidation. I mentioned them in passing to Lee, and she suggested that I use a product called Restoration on the blocks. They cleaned up in spectacular fashion. They looked fabulous, but there was still the size problem, and not much of a margin to work with...what to do?

In January, after much prodding by my husband's family to produce something from these blocks, I finally took on the project. Lee helped me select fabrics from Jo Morton's traditional prints with a bit of americana flavor. I was lucky enough to find the original patterns in the bag with the finished blocks so I had some idea of how the finished quilt was meant to be laid out. From then on, it was a matter of attempting to square up each block and cut the frame for each block individually, since the size isn't uniform and I didn't want to cut into any of the stitched designs. All in all, I couldn't be happier with the end result. 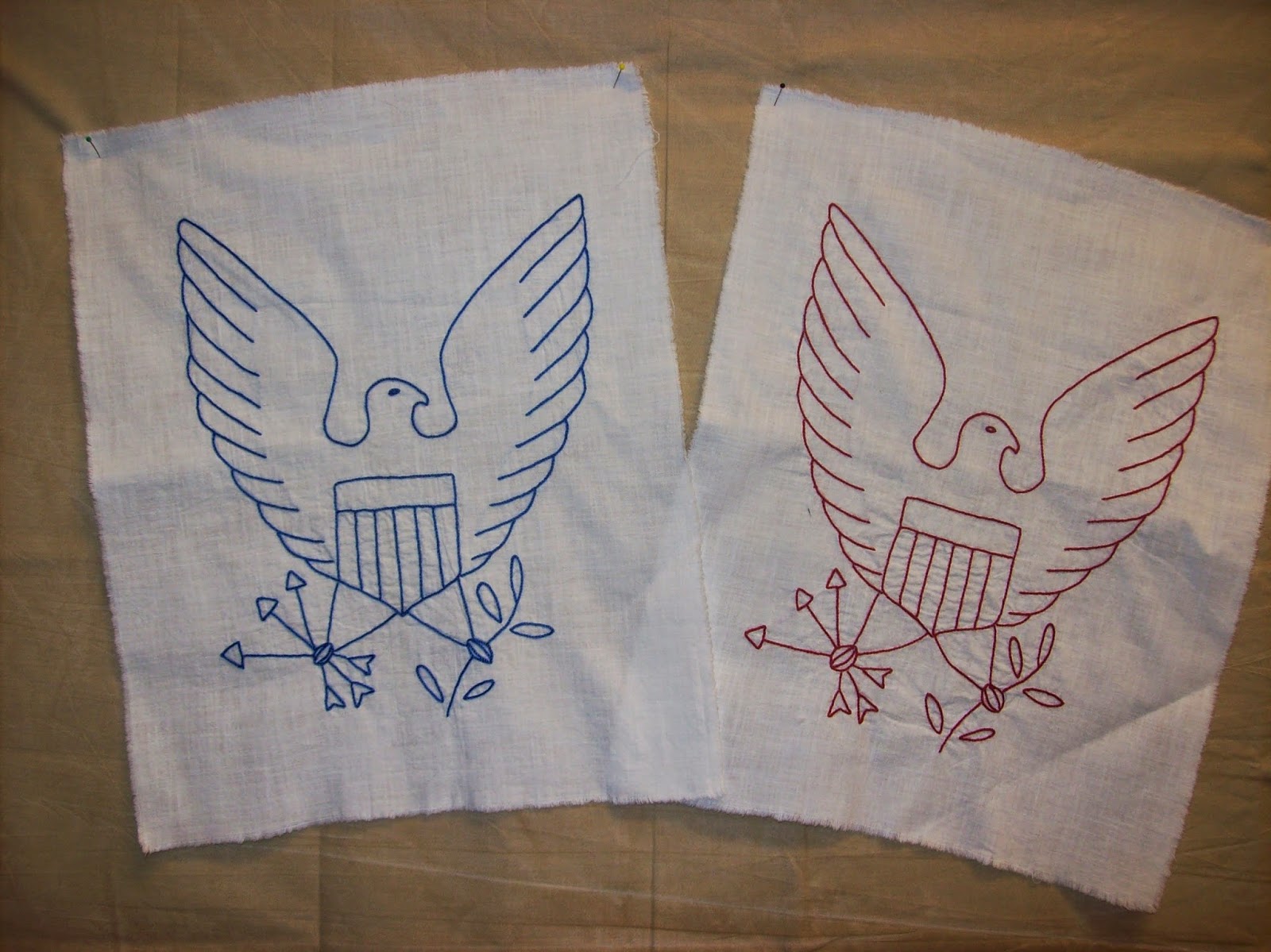 And now for a little background, I have no idea when these blocks were made. I am guessing that the pattern came from the Kansas City Star and that they came via mail through the newspaper. Everyone who might have known when Aunt Alberta sewed these blocks has passed, so it will remain a mystery. If anyone has a clue of the origin of the pattern, please share it with us! I still have the patterns, and they  are still useable after all these years. 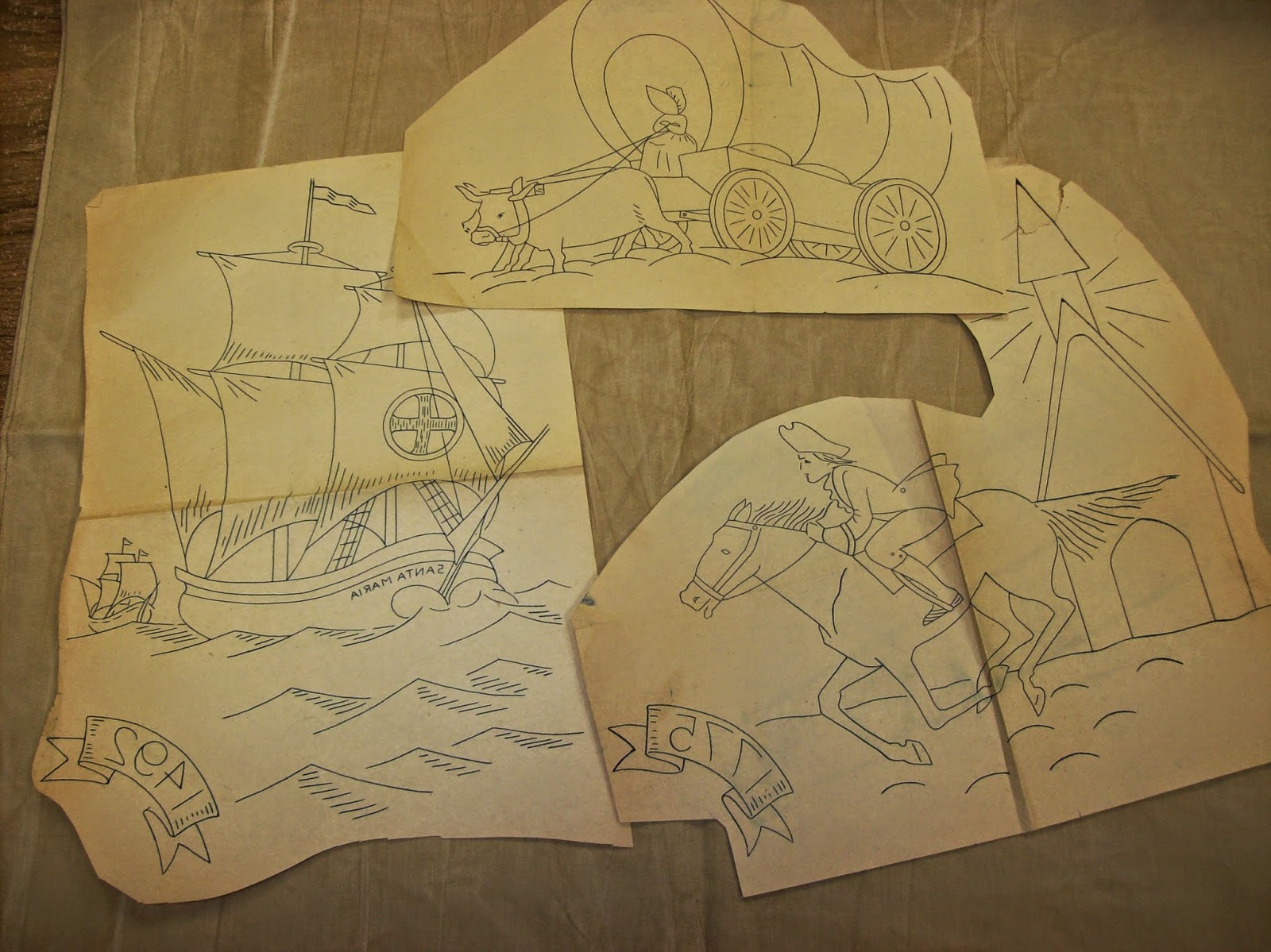 Special thanks to Two Thimbles and Nikki Crisp for the all the design help and the special quilting. I loved working on this project, and I hope to do another project soon from a different group of old blocks that I have lying around. Happy Quilting!

A customer is looking for a new home for her featherweight....have you been wanting to get your hands on one of these little gems? 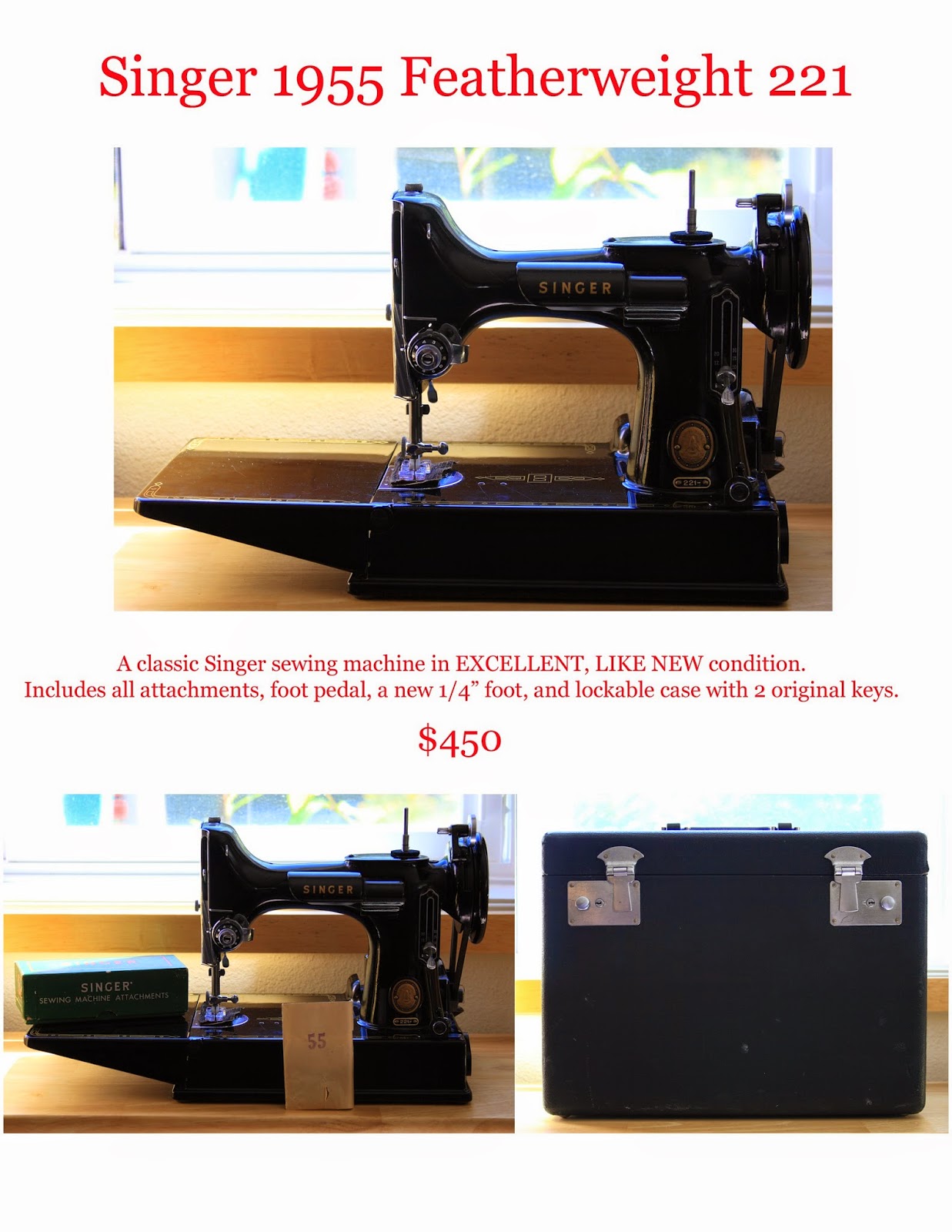 If you're interested in this sewing machine,  please contact the shop, and we will put you in touch with the seller.


Posted by Two Thimbles Quilt Shop at 1:45 PM No comments: